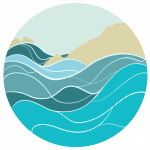 The ice caps are melting, sea levels are already rising, and Hawai‘i is feeling the impacts. The sea level around Hilo Bay has risen by 10 inches since 1950. And now, it’s rising faster at about 1 inch every 4 years. This increases the frequency and reach of coastal floods, which affect our communities. 2017 was a record flood year for Honolulu (37 flood days, when historically, the average has been around 4 days). These floods were fully attributed to climate change/sea level rise. Today, Hawai‘i has 66,000 people regularly at risk from coastal flooding. In Kailua for example, 50% of the population is locked-in below expected flood zones.

What does this mean for Hawai‘i?

INCREASED INLAND FLOODING. Since the 1960s, the number of annual flood days in the State has increased significantly. Our communities are at risk, and not just near the coast. Flooding is worsening further and further inland where seawater will flow backwards from storm drains – leading to pools of dirty, contaminated, brackish water where we live. In Mapunapuna industrial area on O‘ahu, the last 3 years have seen a dramatic increase in the number of flood days, so much so that the area is now considered to be in a state of chronic flooding. This hurts businesses, damages vehicles and infrastructure, and damages our coastal ecosystem.

MORE FREQUENT HIGH TIDE FLOODING IS THREATENING OUR CITIES. The frequency of yearly floods in Honolulu has spiked, and you don’t have to live on the coast to see the evidence. More flooding means increased damage to roads and buildings and overwhelmed drainage systems. In Hawai‘i, where we often have only one road in and out of our communities, road closures because of flooding and erosion are a big problem.

TRADITIONAL AND CULTURAL PRACTICIES ARE AFFECTED. Sea level rise affects traditional and customary practices, including fishpond maintenance, cultivation of salt, and gathering from the nearshore fisheries. This can have a negative effect on people’s spiritual and mental health.

Chronic flooding will lead to an additional 25,800 acres of land becoming unusable, and 6,500 structures are projected to be at risk due to sea level rise.  About 550 cultural sites, 38 miles of major roads, and at least $19 billion in assets will be vulnerable to chronic flooding. Such widespread flooding could change the character of the islands by affecting cultural heritage, tourism, agriculture, and ecosystems.